I’m terribly fond of my cuppa, as you well know, so when those lovely folk at Twinings asked me to try out some of their Green Tea I leapt at the chance.  I rather fancied upping my antioxidant level, thus reducing my number of free radicals, which can only be a good thing.  Made from only natural ingredients, there’s a White Tea range, a Green Tea range which has all sorts of goodies like fruits and herbs with it, and some with floral infusions.

In the interests of expanding my horizons, I went for one of the Selection packs, because it gave me five different types to try.  How mindboggling is this: Green Tea with Cranberry, Green Tea with Orange and Lotus Flower, Green Tea with Pineapple and Grapefruit, or Green Tea with Apple and Pear.  How can you even eat a lotus flower? 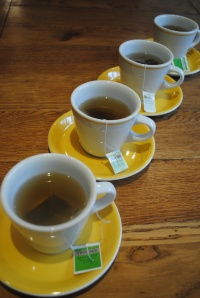 They looked ever so pretty all laid out and infusing. Being a conscientious sort, I’d done my homework (aka read the instructions, which is nothing short of miraculous) and realised that the one thing which would ruin everything is to pour boiling water on the teabags. So I forced myself to wait a bit once the kettle had boiled.  I occupied myself by checking out the rather funky Twinings Facebook page.

The kitchen smelt rather lovely, all crisp and slightly exotic, but that might have been because the Other Half was doing the ironing and I accidentally picked up the wrong fabric conditioner, so instead of lavender we’ve got a rather alarmingly sunflower yellow something or other to use up.

With my professional hat on, I was attempting to be impartial, whilst having secretly already decided the Cranberry one would be my favourite. However, I was completely wrong. It was the Apple and Pear which I fell for.  It just goes to show you shouldn’t judge a book by its cover, nor have preconceptions.

Orange and Lotus Flower was punchy and floral, the Citrus rather more subtle but still with a definite zing about it.  The Cranberry lingered and became almost chewy, whilst the Pineapple and Grapefruit was teeth-lickingly fresh. But the Apple and Pear was my favourite; delicate and aromatic, yet with a definite kick.

A fun way to spend a rainy afternoon.

I was rather hoping that as a result of drinking numerous cups of Twinings tea, two slim cartoon versions of myself would swim o’er ocean, climb a mountain and be reunited in a hug.  It hasn’t happened yet, but I’m open to offers.  I’d look rather good in a rowboat or being washed up on a beach. Just saying.

As I was clearling up my little Sunday experiment, it struck me that cooking with tea might be rather fun.  So I’ve spent some time thinking up ker-azy recipes to cook with these little packets of fruity blendedness.  Mes amis, I present to you my patent pending ideas:

Yeah, I know. Don’t give up the day job.

1 thought on “An Afternoon of Green Tea and Tasting”