I’ve recovered after two nights of uninterrupted sleep and rather a lot of vegetables, and a distinct lack of the old vino blanco. I still can’t quite believe that it all happened really. But I thought you might like evidence that I embraced the traditional hen activity of looking really rather ridiculous.

I think it quite suited me, ackershually

Anyway, I think you might have gathered that the weekend was totally awesomely brilliantly fabulous by now, so I’m going to tell you all about the food. The food. It might not have escaped your notice that I rather like my food, and unsurprisingly my friends had figured this out.  Hence the choice of Ludlow, a foodie haven.  I tell yez, you’ll be dribbling into your keyboards by the time this post is over. If you’re not, you disappoint me.

First up we had these totally fabulous cupcakes by The Cupcakery Bakery. 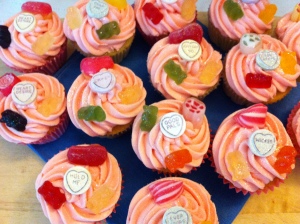 Eat me. You know you want to.

Aren’t they utterly divine? Everyone was raving about them. They came in a nifty little box which meant none of them fell over on the twisty twiny route to Shropshire.  Every one had a different sweet topping and Love Heart messages – what a lovely idea.  And edible glitter is the best idea ever. We had them with champagne and they were simply wonderful.  Make a note of this combination for future cake consumption, people. It works.

A little known factoid here. I’d never actually eaten a cupcake before. I’m not sure why, but for one reason or another I’d just never gotten around to it. But it was a revelation – all creamy and crumbly.  If I didn’t have to fit into my dress I’d have had two. Check out their site at www.cupcakerybakery.co.uk. Isn’t it a brilliant name for a cupcake company?

One the Saturday morning we went into Ludlow for a pootle around. I had to be forcibly restrained from buying everything in sight, on the grounds that there wouldn’t be room for me in the car on the way home if I unleased my inner shopper.

I know it's not food, but you drink out of them. And I bought a jug.

It was market day. I was in heaven. 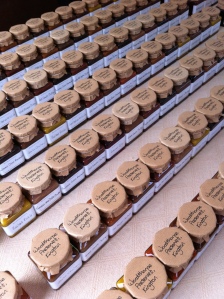 I did get some Ludlovian cheddar though.  Ambrosia from the Gods. 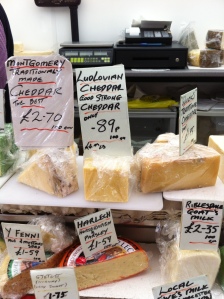 Treated myself to a Greek Oregano plant. It would have been rude not to.

I resisted the garlic.

I rather regret that, actually. I guess at least I didn’t buy any eggs to smash on the way home.  They’re rare, those Guinneaux Fowl. 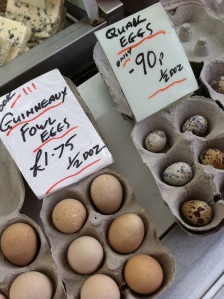 Before further damage could be done, we espied a rather lovely Ye Olde Coffee Shop.  Whereupon we decided to fortify ourselves with a traditional cream tea.

Yes, that was an ice cream scoop of clotted cream on the plate. It was goooood.

And then we went back to the farm and had lunch.

It’s ok, though. We spent the afternoon running around fields and working off at least one mouthful.

In the evening we dined at The Clive. I can now die a happy woman.

I’m glad I wore a dress with no waistband, to be frank.  And that I have generous friends who allowed me to taste every dish on the table.  I couldn’t have managed one more morsel. I even had to share my sticky toffee pudding. This is not a usual occurrence, believe me.

And in a marvellously apt ‘Circle of Life’ way we had a tour of the farm on Sunday morning, where they raise beef and lamb. I took my veil and sash off for that.  I didn’t think the animals would appreciate it.

8 thoughts on “A weekend in food heaven”