One of my favourite things to do, just like Winnie the Pooh, is go expotitioning with my friends.

On Friday I went to Oxford. It wasn’t the North Pole, but it was close. If ever there was a reason to justify buying a Bear Grylls Polar jacket, Friday was it. Sadly, I didn’t see a Bear shop. Otherwise I would have gone in, fainted at the price tag, defrosted and come out again into the polar region of Oxfordshire.

I had never been to Oxford proper before, and I just loved it. It was wonderful. I was with two lovely friends who also like explotitioning. We wandered around, muttering about the architecture, pondering those who had trodden before us, and occasionally leaping out of the path of a passing cyclist. But we did have a purpose in going, and given that we only had an afternoon, we had determined to make the best use of our time. 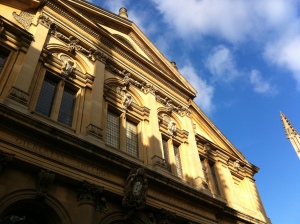 During preparations for the expotition, we discovered the Footprints Tour of Oxford. Led by an extremely knowledgeable and enthusiastic Tom, who was Tigger-like in his passion for his home city, we went hither, and thither, and yon.

For two hours we traipsed about, catching patches of sunlight and hopping on the spot to keep the circulation going. We learned about the Oxford Martyrs, College traditions, the Radcliffe Camera and underground tunnels. From Blackwells’ bookshop to Hitler’s plans to make Oxford the capital city of Britain, via Harry Potter and Inspector Morse, we crammed as much into those two hours as possible. It was great. And the premise of the Footprints Tour is that you only pay at the end if you feel they have earned it. A great marketing idea! No pressure to tip and a fabulous way to see a city centre at speed.

By the end of the tour we all felt as cold as Eeyore’s tail (which, as of course you all know, Eeyore trailed in the stream to rescue Roo after he fell in, but Roo was saved by Pooh using the North Pole). We hadn’t fallen into any streams, nor were we at the North Pole, and we decided not to go to the Grand Cafe, the oldest coffee house in England. Instead, we went to the Ashmolean. Wow. They make an extremely good hot chocolate. They also have some pretty fine artifacts, not least some amazing Chinese armour, beautiful china and a busty staircase.

But we were on a hunt. European paintings viewed, glassware left behind, we quested onwards. The King Alfred jewel was hidden in the depths of the museum and we were not leaving until we’d found it.

Proof that good things do come in small packages, even if it wasn’t as impressive as some of the weaponry.

Then we decided to be even more cultured and go modern. We went to Tescos to buy garlic bread, and treated ourselves to both ciabatta and pizza style to go with that evenings’ lasagne.

Like Pooh, we felt very proud of what we had achieved on such a momentous day.

3 thoughts on “Sing ho! For the life of a bear”